I’ve been wanting to write about this new place I tried a couple weeks ago for a while now. It’s called The Waffle and it was the MOST AMAZING food in the world. It might have also been so because I was starving and we went at around 10 PM and late munchies always taste better than actual dinner at dinner time.

I went with a group of friends who have been wanting to explore new restaurants in LA for a while now. The restaurant is located in Hollywood and serves a fusion of common day foods but in a creative way. They serve a variety of different waffles, unique sandwiches and hamburgers, and some interesting appetizer. If you go here, be sure to try the WAFFLES, after all that  is the name of the restaurant. The waffles were delicious. I got the Red Velvet waffles and I can’t begin to describe how good they were–even better than red velvet cake. 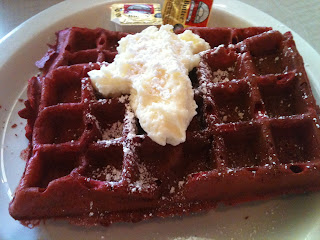 The cheese they put on top makes the dish and is indescribable. Apart from the red velvet waffles, my friend got the vegetarian burger which is not made of regular burger buns, rather they are waffles. It made for an interesting look, but frankly tasted just the same as any old burger. If you go here, you should get the waffles and ignore the rest of their menu. Their specialty is waffles and well they serve their name justice.

The atmosphere of the restaurant was great and the waiters were super friendly especially because they knew we were college kids. One of my friends ordered coke and then later changed his mind to a chocolate milk. The waiter just gave him both for one price.

The bad thing was there was were only 3 or so tables full, but still it took them 30 minutes to deliver the food after we ordered. The food is also pricey for the amount they serve. Ordering a plate of waffles was not as filling, although they were generous with the toppings. College students like us definitely cannot afford this place all the time. But, it was worth a try and it will be my go to when special occasion arise.