Silicon Beach- the most exciting place to be in tech

We’ve all heard about Silicon Valley- the legendary birthplace of the tech industry, where entrepreneurs, venture capitalists, and engineers abound.  Silicon Valley has given us the likes of Apple, eBay, Facebook, Yelp, and more.  Many computer scientists, engineers, and business people aspire to work at Silicon Valley.  It is the mecca for innovation and excitement.

But you know what’s cooler than a valley? A beach.

So what if you took all of that amazing talent and culture from the Bay-area (where Silicon Valley is roughly located), and took it south to sunny Los Angeles?  Well, you’d get a better tan at least.

But actually, Los Angeles has even more to offer.  The metropolitan area is already home to bustling film, music, fashion, and video game firms.  Bringing the entrepreneurship crowd in could make for a Big-Bang style collision of everything cool and new.

Of course, none of this speculation means anything if “Silicon Beach” isn’t even a real thing.  But industry observers are already seeing that Los Angeles is developing a vibrant start-up community.  As a computer science student at USC, I get a deluge of ads along the lines of “Seeking app developer for iOS!” or “need web developer for website business!”  Students are often found discussing concepts for businesses.  Last year, I witnessed a guy living in my house start up a bicycle-based advertising business! 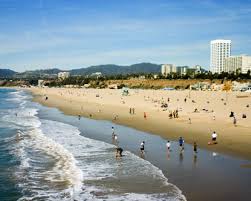 It’d be pretty cool to have your office building right about here, right?

I could go on forever about the amazing budding entrepreneurs I’ve met here, but I want to share my own experience.  Recently, I agreed to help a fraternity brother with his business, Sustainable Microfarms (his idea is pretty legit- not going to discuss it here, but he’s won grants from California’s Department of Energy).  My job has been to design and develop an Android application to provide a GUI interface for his product.  Along with the programming that goes into it, I also have to figure out how to program a microcontroller on the system to send information over Bluetooth.  I still can’t even wrap my head around the fact that I’m doing stuff like this.

Working on this start up has been so rewarding.  It pushes you to learn skills your professors don’t have time to cram into class, and it gives you an idea of what goes into a business (I’m picking up some ideas on management and business infrastructure along the way).  And, best part about a start up, it either works out and gets you money (who doesn’t like that?!) or you take the skills and growth you got from the experience and use that to land a job somewhere else.

Start ups are not for everyone- but being around the culture is.  There is so much to learn from fellow engineers, and USC is an exciting place to be precisely because it attracts this kind of talent.  USC is even held a conference on Silicon beach this month.  Sure wish I could have gone!

Well, that’s all for now.  Wonder what I should do this weekend… maybe go write some code by the Venice Pier?  Sounds like a plan.

If you want to learn more about Silicon Beach, check out this article!