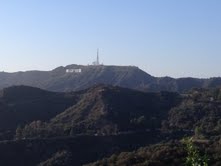 Hey everyone! This weekend was super packed with fun activities (including Viterbi Ball, my favorite event of the year!), and one of my favorite things that I hadn’t had the opportunity to do yet was going to Griffith Park Observatory! Home of some really awesome telescopes and a basic space museum, Griffith Observatory is a really cool place to spend an afternoon.  And it’s free!

Located right near the Hollywood sign on a hill, there are also some amazing views of Los Angeles and the Hollywood Hills.  It is definitely the best view of the city, and even better when its windy or just rained and the air is super clear! While I was there, two things I did definitely stood out.  First was a planetarium movie describing the history of the universe which was super interesting and trippy.  Second was a demonstration of a tesla coil, and having just finished physics: electricity and magnetism I thought this was quite cool. Here’s a video of what the coil looked like!

Overall a great day at a place that is really unique and a part of Los Angeles!