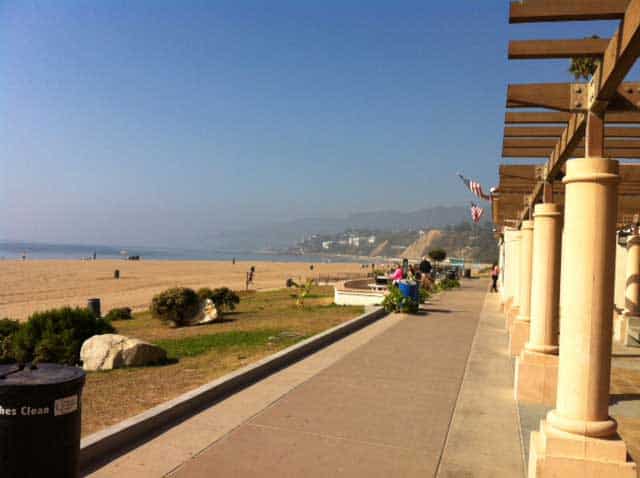 Thanksgiving on the Beach!

This past week, my family came down to Los Angeles for Thanksgiving.  Because I am in the marching band, we had to be there on the Friday after Thanksgiving, so it did not make sense for me to go home during Thanksgiving.  It was really nice to see my family and spend a great Thanksgiving with them.

They drove down from Sacramento on Monday and got down here on Tuesday.  I met up with my dad after my band practice Tuesday evening, and him and I went out to dinner together at L.A. Live and then saw the new James Bond movie, Skyfall.  It was really nice getting to see him and catching up with some man to man time.  Also, he has been showing me James Bond movies as long as I can remember and it is something that we share a common interest in.  I am glad I was able to go see the movie with him and it was a great film.  I liked that this new bond movie took a turn from a lot of other James Bond movies and did not necessarily follow the usual “Bond Formula”. The next day, I biked over to campus and met up with my family.  My sister was taking a tour of campus because she is interesting in coming here for Astronomy.  I would love to have another member of my family here at the best university in the world!  After her tour, we had lunch and headed over to their hotel in Marina Del Rey.  It was so nice being right by the ocean and near Venice Beach.  I spent most of the afternoon napping and relaxing – it was fantastic!  We had a great dinner at the hotel.  I got the salmon:). The next morning, Thanksgiving day, I woke up and went with my family to Venice Beach.  We rented bikes, which was a lot of fun.  My dad and I ended up biking from Marina Del Rey up to Pacific Palisades.  It was cool riding right along the ocean.  It didn’t hurt that it was a perfect day.  After the bike ride, I went back to my apartment near USC to prepare for Thanksgiving dinner.  I started a tradition when I was much younger of making Pumpkin Bars every year for Thanksgiving. Even though we weren’t at home, I still had to make them, so I spent the afternoon baking and getting fancy for Thanksgiving dinner.  Then, I headed out to Marina Del Rey to a restaurant called “Charthouse”, where my mom made a reservation for dinner.  They had a turkey dinner, which was delicious.  Then, afterwards, we went back to the hotel and had my pumpkin bars that I made.  It was a great Thanksgiving, even though I was not home. That night, I went to the mall for some Black Friday shopping.  I have never been Black Friday shopping, but I figured it would be fun to check it out.  It was completely insane!  There were so many people at the mall, and I waited in line for almost an hour just to get a video game that was on sale, but it was worth it.  That was definitely an interesting experience I won’t forget. On Friday, I had band practice most of the day, so I did not get to spend much time with my family.  It was fun learning the rest of the halftime show though, and definitely got me pumped up for the game on Saturday.

Saturday morning, I woke up at 6:00 AM for band practice, like usual.  It was weird thinking that this was the last Saturday morning rehearsal of the year.  After practice, I met up with my dad and my sister, who came to USC because they were planning on going to the game.  Even though the game did not end up with USC on top, the band had a great game.  We played well and had a good show.  It definitely made me look forward to next year.

I had a great Thanksgiving break!  Even though it was short, it was nice getting to see my family and getting some well-deserved relaxing time in.