So, this past weekend was Parents Weekend at USC.  This annual event invites all the parents of students at USC to come check out the university and attend different interesting talks and events around campus.  This past weekend was also the football game against Stanford, which was an extremely exciting game to be at.  Luckily, my family got to come visit me, which made it a really amazing weekend.

My dad and my grandpa drove down from Northern California on Thursday.  However, we did not get to see each other that night because they did not arrive in L.A. until late.  On Friday, I got to play for them as a member of the USC Trojan Marching Band while they ate lunch in Alumni Park.  Afterwards, we got to sit in Alumni Park together and enjoy the perfect day outside. 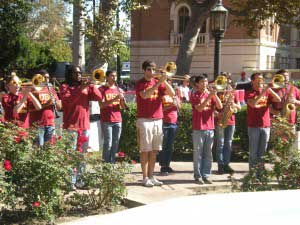 After that, I took my dad and grandpa to my research lab to show them what I am working on.  My grandpa worked as an engineer during his career, so he was very interested in what I was working on and engaged in a discussion with my supervisor.

That night, we went to Portofino’s Cucina Italiana, which is a small restaurant located in Central Los Angeles on the corner of Main Street and 5th Street.  I have never been there before, and when we walked in, we were a little unsure about the place because there was next to no one eating there.  However, after sitting down for a while, we started to realize how great this restaurant is.  Our waiter was really nice, they brought sparkling water, which was classy, and they had a killer pink lemonade!  Then, they brought focaccia bread glazed with olive oil, which was delicious.  I got a spaghetti pasta with chicken and hot chili flakes in an olive oil and garlic sauce.  It was sooooo good!! For dessert, I had vanilla bean ice cream in a cup of espresso with whip cream on top!  I usually don’t like coffee, but I was in heaven with that dessert!! My dad and grandpa got tiramisu and they said that it was delicious too.  I am really glad we went there for dinner; I give it two thumbs up!! Saturday was game day, which meant only one thing… Beat the Farm!  My aunt, uncle, and cousin came up that day from San Diego to come see the football game against Stanford, which was nice, because it only added to the weekend.  I really enjoyed spending time with everyone.  That afternoon, we went to downtown L.A. and checked out some interesting places, including the Walt Disney Concert Hall.  I love the architectural style of the building’s designer, Frank Gehry; the Hall is so unique and intriguing. That night, everyone came and saw the game.  Even though we lost, it was a really good, and our team played well.  My grandpa was still sad though, being a UC Berkeley graduate and always wanting Stanford to lose. I had a great time this past weekend and I enjoyed seeing not only my dad and my grandpa, but also family from San Diego.  It was neat getting to give everyone an idea of my life and a sliver of what it means to be a Trojan!