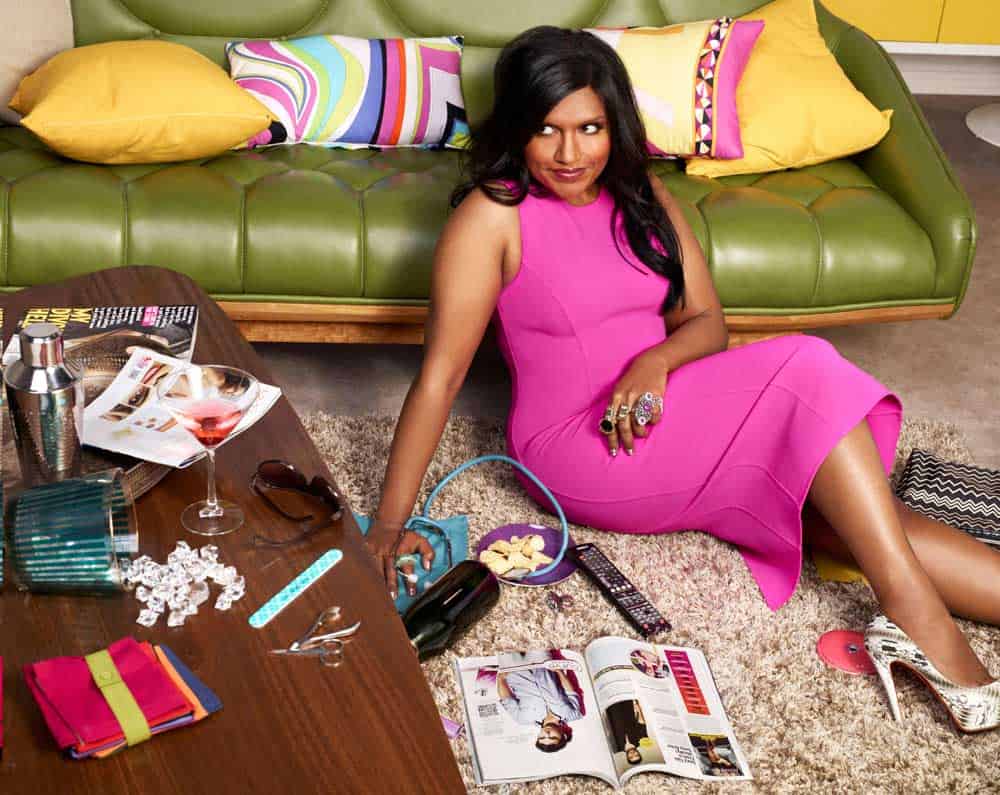 The Mindy Project: 6 Reasons to Fall in Love

So basically, over winter break I was coerced into beginning a new show, despite much resistance. For about the 10th time, yet another friend had told me that I was Mindy. What does this mean? I kept wondering to myself. You even look like her! They would add. My only experience with Mindy Kaling (who plays Dr. Mindy Lahiri on the Mindy Project) prior to this show was her role as Kelly on the office. Although I know her character wasn’t supposed to be well-liked in this role, I really got no sense of her talent or amazing sense of humor from it. However, since starting the Mindy Project, I have become obsessed with her! She is an incredibly talented writer, comedian, and actress. And yes, I happen to have an identical sense of humor with the show’s title character. I am so happy I was forced to begin this show, because it is probably my fave half hour comedy on television right now (I know, bold statement in the face of Modern Family, Parks and Rec, and New Girl, but there’s the personal connection that makes it for me). It’s so much fun to be watching an episode of the Mindy Project with friends. It’s become one of my favorite 20 minute periods of time during the week. Me and a few friends will be sitting on the couch, and every 10 sec they will exclaim with a glee-filled “omg, that is totally something you would say/say/have said” in response to one of Mindy’s classic one-liners or thoughts. It definitely adds a new element to the whole game of television viewing.

I have decided that is is my dream to write myself a role and guest star as Mindy’s cousin in an episode of the next season. With the season finale coming up, I have the summer to think about that, and write my episode. It’s worth a shot! However, aside from my personal connection to the show, it and Mindy are both wonderful. Below, I have outlined 6 reasons to fall in love with Mindy. Please enjoy, and check out the show on Fox’s website, or on hulu:)

1. Although she is a successful OB/GYN in her 30s, she still doesn’t really have her life together. And that makes us feel better as an audience who doesn’t have it together either!

Mindy can be straight up crazy sometimes, and it’s so liberating to see. She acts on her bad ideas, she gets into physical altercations, and she even makes an awful, drunk speech at her ex-boyfriend’s wedding and ends up detained in jail for riding her bike after (and subsequently riding it into a pool in a backyard that is not her own). Yet, she still makes it to work the following morning. You’ve gotta love a woman who knows how to have a messy personal life but keep it professional at work.

2. She knows how to have a good time!

Whether it’s at the club with her co-workers, hosting the annual holiday party, hanging out at the local book store, going on adventurous dates, or just grabbing a bite to eat with her friends, Mindy makes sure to throw in the fun after work and on her weekends. She has a great balance in her life between the serious and not-so-serious (ok, maybe it’s a little skewed in the direction of the latter). She shows us the way life is supposed to be.

3. She takes care of her family

In the eighth episode of the season, we meet Rishi, Mindy’s younger brother who is a student at Stanford. She not only attempts to support him morally (even when he shares his desire to be a rapper), but it is revealed that she is using those awesome earnings of hers to pay his tuition and other living expenses. It’s great to see some of those traditional, less stereotypical Indian values come into play on television! We love that Mindy’s got her lil bro’s back, even when he’s being whack…

4. Her wardrobe is absolutely fantastic.

Mindy knows how to mix it up. Whether it’s the perfect tweed jacket/pantsuit for a day at the office, a sparkly, form fitting dress for the club, or a classy skirt and top for a date, she expresses her style in a number of ways. I mean, homegirl even looks good in scrubs and athletic shoes. She isn’t afraid to take fashion risks, and she doesn’t take herself too seriously when it comes to what she is wearing. Take for example her exploring of options during the Halloween episode…given that she’s absolutely hilarious, she has no problem making herself the joke, and can use her wardrobe to do this.

Which brings me to my next point!

5. Her sense of humor is so on point.

Mindy understands that she brings laughs to her friends through her romantic failures and just her sheer presence. The fact that she shares her inner most thoughts is priceless. For example, at the beginning of the show, when Mindy’s voice opens the show as she talks about what’s going on around her/is comparing it to some rom com, we assume this is like any other show opening. We assume Mindy is just narrating for the audience. Yet, we quickly learn that she is actually saying these things out loud to one of her fellow cast mates and can’t help but giggle. Her brutal honesty, especially with herself, makes her lovable and hilarious. I can’t remember the last time a protagonist was so harsh on his/herself, but not at the expense of their entire self confidence and presence. She walks the line beautifully. Her one liners are to die for, and watching her go on dates could entertain almost anyone for hours.

6. She gets along well with people from all walks of life, and finds the good in everyone.

Given her own life circumstances, Mindy isn’t exactly the most judgmental person (she’s usually being judged by others). However, even when she is, she admits it and shares her judging with those around her. Namely, she tells people what she thinks of them straight to their faces. Yet, despite any initial judgments she makes, she somehow ends up finding the good in any weirdo/oddball/not-so-great person she encounters. Whether it’s Morgan, the ex-con she hires on as a new nurse, or Beverly, the crazy ex-nurse (who punches her in the face) that she hires as an office assistant, Mindy knows how to relate to people from all walks of life. She can appreciate their friendship, their unique world view, and the perspective they have as a result. Her friend group is very diverse, and consists of people who may not all be so conventionally defined as “successful” or “good.” She reminds us that pretty much anyone can have a special impact on our lives if we let them. And we love her for it.

I can’t wait to see where this show goes, and watch Mindy grow as a leading lady. She is already a fantastic person, but once she gets her life together, she will be unstoppable.