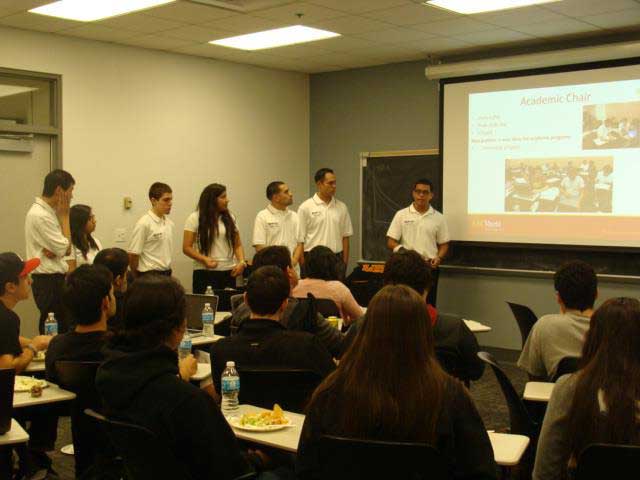 Learning How to Present

Today, at the SHPE Retreat I learned some really helpful skills about presenting.

We broke off into groups and had to tackle a particular case study and come up with an event. Afterwards, we had to make a powerpoint and present it to all the members who attended the retreat.

Though my group won the competition, I learned about my flaws as far as presenting goes. First of all, on the powerpoint it is important to follow the 10, 20, 30 rule.  You should have a maximum of 10 slides, no more than 20 words per slide, and size 30 font on the slides. This keeps people interested and not losing focus because of long sentences on slides. Second, I learned that it is important to have some pauses in between your statements. I was so eager to speak and felt that I had great points I needed to get across but zealousness did not help me in this situation. It is important to speak calmly and give the audience enough time to absorb the great ideas you may have. Lastly, I learned that even though I did not use the “uhm” filler when I got stuck, I would say “you know” in place of it. This is equally as bad, and it is of the essence to study the material you are to present. This will help you avoid using fillers and seem knowledgeable.

Once the case study was over, we headed over to In n Out near Dockweiler Beach, near LAX. We played football there and then had a Bon Fire. It was a great experience and I learned what it means to be a good presenter.  Had a great time today!

This is Pedro's Bio.... it needs more info

This is Pedro's Bio.... it needs more info