Making Thinking Fun – A Deconstruction of the Ego

Conversation is perhaps the most incredible, yet confusing phenomenon of our existence.  We communicate with everything around us.  And yet there is no perfect language, no formal system that can clearly define the reality around us.  Just stop and think for a second.  When I speak, your brain hears a fluctuation in pressures and vibrations, translating that into comprehendible vernacular.  But it begs the question, do the sounds themselves hold intrinsic meaning, or is it just garbled noise that we collectively agree to mean a certain idea.  If it is the latter, then a certain level of human error and variability must be acknowledged.  It means that potentially we do not grasp the fullness of reality.  So what are we missing?

Things like this stimulate the mind, enrich the soul, and drives questions further than just surface level.  It is about changing the way you see problems, that intuitive assumes different forms for each person.  Collaboration at this level cultivates an intellectual health.

Take genetically modified foods (GMOs) for example.  As much as it was a feat to identify how we as humans could alter the genetic blueprint of corn to make it more yellow, sweeter, and larger, take the perspective of the corn.  Imagine if a Darwinian scheme, the corn has essentially persuaded humans to genetically modify it such that it will now survive longer as a species than if left to its own devices.  In a similar vein, we typically associate the advance nature of a species by its complexity.  But interestingly enough, the rice genome has been decoded and contains between 40,000 and 60,000 genes where as humans contain only 30,000 to 40,000.

While we can agree most people are more advance than a grain of rice, this serves to show we live on an orb of beautiful complexity.  Stay curious.  Do not be content living in the shallow end of the life pool. USC: The Home I Chose

Space is Hard – Interning at Aerospace 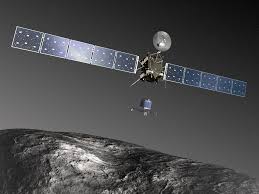