Hi everyone! I hope your day is exciting, wherever you are and whatever you’re doing 🙂

These past few weeks in Singapore have gone by in a flash – its hard to believe I’ve already been in Singapore for more than two months, which means there is less than two months to go! I know I’m going to miss this place so much, especially getting to hop on an airplane to go explore exotic places every couple weeks. This semester has truly been the adventure of a lifetime and I already know I’m going to be pretty sad to go home!

Between travels, February and March have been super exciting! Read on below to see some of the things I’ve been up to here in the city:

Fun fact about Singapore for the week:

Also, Durians (and only durians out of ALL other fruits) are not allowed on public buses for some strange reason… I have no idea why… 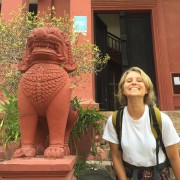