Wow, this has been a crazy semester. This semester marked the last semester of being section leader of the trombone section in the USC Trojan Marching Band after two years. It also marks my last full year in Los Angeles. From tough classes to fun band trips, fall 2013 has been pretty eventful. However, giving you all the details of this past semester would be a little much for one blog post. Therefore, I have put together my “Top 10 of Fall 2013”. Enjoy! This year marks the first year that I went home for Thanksgiving. The last three years, my family has always come down here. They stay in a hotel, we eat Thanksgiving dinner together down in L.A., they go to the football game that Saturday, and then they leave. I always love spending time with them, and I am so happy that they have been able to come down to Los Angeles in previous years. However, there is something special about actually going home. It was so nice to get together with my dad’s side of the family like we used to before I went off to college. And it was nice having a couple days in NorCal with my parents. The picture above is from a hike we went on in the American River Canyon just outside Auburn. On the second weekend of November, I went with the USC Trojan Marching Band up to the Bay Area for the USC vs. cal football game. This trip is called the Weekender, and lots of students travel up with the team as well. It was fun being on the bus with the trombone section, and getting to know people in the section better. It was also fun going to Joe’s Crab Shack as a section, which we do every year on the Weekender trip. The game made it that much better too, winning decisively over the bears. The picture above is from the bus. Every bus had a theme, and ours was Christmas! There is not much to say here. It just felt so good to finally be done with my last band practice after four years. I have put so much into the program, and had such amazing experiences over my four years. For better or for worse though, all good things must come to an end, and it was nice to spend the last day reflecting on all four years. The picture above is of the senior trombones during the seniors’ “final lap” around the track! In my drilling technology class (PTE 465), the class took a field trip to the drilling rig that the professor works on when he is not teaching. It was really neat to talk to different petroleum engineers working in the field and have them explain what life is like on the rig. Because this trip was only a couple weeks ago, we had already learned most of the material by this point, so the field trip was an opportunity for the class to connect theory and power point presentations to the “real deal”. It was neat to actually get to see what the professor discusses in class. In the middle of the semester, the section leaders in the band were told that there was a “big surprise” gig coming up and that we had to get people from our sections to do the gig. We had no idea what it was for, but we showed up on Monday night eager to find out. We walked into Bovard Auditorium, and get in our formation to play. Then, at the last second, Will Ferrell slips behind the curtain, waves to the band, and throws on the drum major outfit. We then marched out onto the stage with Will Ferrell being our “drum major”. That was pretty awesome, and something I’ll never forget. Every Wednesday, they have trivia night at Tommy’s Place on campus. I have enjoyed going every once in a while and hanging out with some friends in band. One Wednesday, they had an athletics-themed trivia night, and Interim Head Coach Orgeron showed up to ask some of the trivia questions!! I was so excited, because he is such a nice, charismatic guy who really understands what it means to be a Trojan. The best part of the night was that the team I was in won, and we got to snap a picture with Coach O! This is not necessarily an event, but one of the best parts of this semester has been marching and spending time with my squad. In the marching band, each member is a part of a four person squad. That squad always marches together on the field, and they are your mini-family. I have really enjoyed the people in my squad. We all got along really well, and enjoyed hanging out together in and outside of band. My favorite squad memory was getting milkshakes at Ground Zero late on a Thursday night. Even though the game did not go our way, this trip had to fall in the top 3! The marching band travels back to notre dame every other year, and this was my second and last trip. Even though the game is at notre dame, the band stays in Chicago Thursday, Friday, and Sunday. My sophomore year, I traveled with the band to Chicago for the first time in my life, so that was a brand-new, exciting experience. However, knowing a little bit more about the city this time around made this experience even more special in a different way. I had a great time exploring more of Chicago, including Navy Pier, State St., and the Chicago skyline on an architecture boat tour!! It was so nice to explore one of the most amazing cities I have ever seen with good friends. 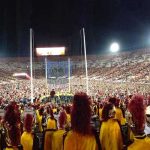 For three years, USC has lost to stanford (I refuse to capitalize the names of other schools if you haven’t noticed yet). Two of those years, the band has bused up to the Bay Area for the Weekender, exciting to bring home the victory, and we have come up short each time. This year, stanford came to the Coliseum ranked 4th in the nation, while the Trojans were not ranked at all. The game was exciting the whole way through, with both teams not letting the other dominate. It all came down to a field goal, and I remember my heart beating so hard while watching the football fly up, travel through the sky, and through the uprights. It was such an emotional win and will be something I will never forget for the rest of my life. Even though all of these moments throughout the semester were amazing, nothing can beat a free trip to Hawaii! The first weekend of classes, the senior class in the marching band traveled to Hawaii for the USC vs. hawaii football game. We were there from Wednesday morning through Friday night. We stayed in Waikiki and had a great time walking around the town and along the beach. It was a lot of fun being able to spend time with some of my friends who are also seniors in band and reminiscing about the past four years. It is also nice on these class trips to get to know people in my class who I have not really gotten to know beforehand. I was able to cultivate a couple of friendships on this trip that have really made my senior year so far unforgettable. It was a great trip that I will remember forever, and it didn’t hurt that we won!!